Leptin Resistance Can Cause That “Always Hungry” Feeling 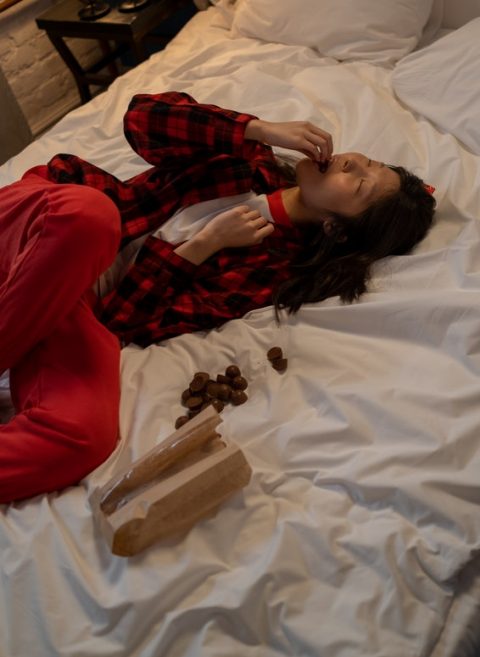 It’s not only insulin resistance we have to tackle when we’re having trouble losing weight.  Gotta investigate leptin resistance too.

It wasn’t until just a few years ago that the media started covering its influence on hunger.

However, now I understand its key role in appetite suppression. .

Let’s get nice and cozy with leptin, our newest BFF.

Leptin is a hormone secreted by our fat cells.  It affects the way the body stores and burns energy. Sometimes it’s known as the “satiety hormone” because it reduces appetite.

The primary role of this hormone is to regulate the overall relationship between hunger and activity in your body.

Your fat cells rely on leptin levels to determine how much energy/fat is available for your daily use.

Depending on your leptin levels, your brain directs your eating and activity behavior.

From an evolutionary standpoint, body fat allowed us to survive periods of food shortage or illness.

The leptin system evolved to keep humans from starving or overeating.  Either one would have put our survival in jeopardy.

Today, leptin is very effective at keeping us from starving.  But this mechanism is also supposed to stop us from overeating.  Yet, for too many of us, it’s not functioning as Mother Nature intended.

Your fat cells secrete leptin in response to the amount of fat already stored on your body.

The hormone insulin stores blood sugar (glucose) from your bloodstream in your fat cells to provide energy for future use.

Leptin has a different job.

Your bloodstream carries leptin into your brain.  Once there, it signals your hypothalamus, that part your brain that controls when and how much you eat.

It tells your brain how much body fat you have stored in your cells.  This helps regulate energy intake and energy expenditure.

In addition, leptin has other functions related to fertility, immunity and brain function.

Here’s how leptin sensitivity should work.

When your leptin levels are low, your brain receives leptin’s signal telling you to conserve energy.  Slow down your physical activity.  Hunger grows.  Time to eat!

In response, your body slows your metabolism and you become more sedentary.

You’ve got enough stored energy to get moving again without putting your very survival at risk. Winning!

It’s this interplay that keeps your body fat and energy levels balanced.

This kind of system is known as a negative feedback loop.  It’s similar to the control mechanisms for many different physiological functions, such as breathing, body temperature and blood pressure.

A counter-intuitive reality about leptin levels, satiety and obesity.

Remember that leptin levels are lower in thin people and higher in those carrying around more fat.

Given the way leptin is designed to work, you’d quite rightly hypothesize that people carrying extra weight would have a lot of circulating leptin.  And that this high level of leptin, therefore, should naturally inhibit their hunger and limit their food intake.

In other words, their brains should recognize that they have plenty of energy stored in all those fat cells and respond accordingly.

Although you’re making what seems to be a logical assumption, sadly, you’re mistaken if someone is actually leptin resistant.

Frustratingly, for many over weight people their leptin signaling mechanism is not working as designed.

While copious leptin may be present, the brain doesn’t see it.  No signal that indicate satiety is getting through.  Hunger continues despite all that available stored energy.

Leptin resistance is believed to be one of the main biological contributors to obesity.

When your brain doesn’t receive the leptin signal, it erroneously thinks that your body is starving.  Even though it has more than enough energy stored in existing fat cells.

This makes your brain change its behavior in order to replenish body fat.

Your brain then encourages you to:

Can you see how willpower is not the issue here?  How willpower can not over power deep, biological hunger?

Eating more and exercising less is often NOT the underlying cause of weight gain.

If you’re struggling with weight loss due to leptin resistance, white-knuckling your way to your desired weight is nearly impossible.  The leptin-driven starvation signal drives this always hungry feeling.

One of the main players in this unfortunate scenario of this disregulation is insulin.

According to Robert Lustig MD:

When insulin levels are chronically high, there is a breakdown in the hormone pathway which signals the brain to tell the body to stop storing energy in fat and burn it. Obesity is the result.

The good news is that we can do something about chronically high insulin to address both insulin and leptin sensitivity.

According to Healthline, several potential mechanisms driving leptin resistance include:

Most of these factors are amplified by obesity,  They can trap you in another in another vicious cycle of weight gain and becoming even more leptin resistant over time.

According to Healthline, it’s possible to reverse leptin resistance

The best way to know if you are leptin resistant is to look in the mirror.

If you have a lot of body fat, especially around the belly area, that’s a reliable indicator.

The bottom line is that focusing on an overall healthy lifestyle helps.

There are several things you can do starting today to address leptin resistance.

Once discovered in 1994, leptin caused quite the stir among scientists.  They hoped to create a drug to help people control their appetite and their weight.

But they were in for an unpleasant surprise when they made this counter-intuitive discovery.   They found that people with obesity had plenty of leptin in their bodies. yet continued to eat and gain weight.

And to their further disappointment, they couldn’t defeat leptin resistance with leptin supplements either.  The supplements couldn’t pass through the blood-brain barrier.  Instead, they’re metabolized by the body.

The It’s Never Too Late Weight Loss program helps you create a lifestyle plan that addresses insulin and leptin resistance.

Though there is no one and done way to eliminate leptin resistance, long-term lifestyle changes are your proven ticket to better health and well-being.

When you want to lose weight and keep it off, you have to take a 360 approach.  There are many factors that could be undermining weight loss.

Creating sustainable lifestyle changes are the foundation to overcoming insulin and leptin resistance.  And overcoming stalled weight loss results too.

It’s time to take me up on my offer for your FREE Strategy Call so you can jump start weight loss.

Make 2022 your year to shed the extra weight you’ve been carrying and fretting about for so long.

It’s Never Too Late to make your weight loss journey easier. A year from now, you will thank yourself you started today.